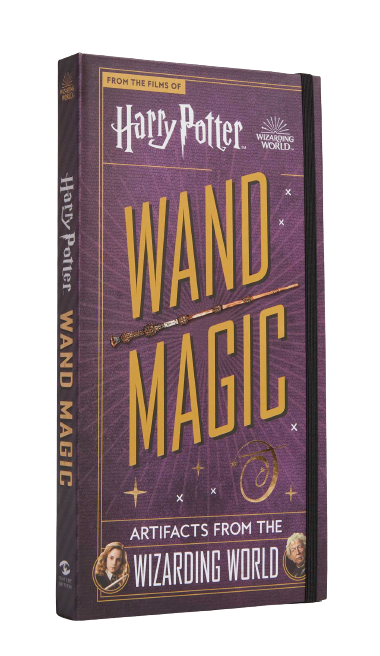 Explore the magic of the beautiful and unique wands of the Harry Potter films, with more than a dozen collectible stickers, cards, patches, prints, and more!

Every witch or wizard in the Wizarding World has a unique wand. And as Garrick Ollivander says in Harry Potter and the Sorcerer’s Stone, “The wand chooses the wizard.” Now you can capture the magic of Harry Potter like never before and collect a stunning array of artifacts inspired by the wands and magic of the Harry Potter films. Inside, fans will learn about all things Wizarding World, relive moments from the films, and delve into the behind-the-scenes magic that brought Harry Potter to life on the big screen.

MORE THAN A DOZEN COLLECTIBLES: Includes reproductions and items inspired by the Harry Potter films, including an Elder Wand–themed pen, a Deathly Hallows patch, Ollivanders sticky notes, a wand-shaped bookmark, spell stickers, and more!
16-PAGE JOURNAL: Capture memories and moments in a deluxe 16-page blank journal
REPLICA OF WIZARDING WORLD BOOK: Includes a paper reproduction of The Tales of Beedle the Bard as featured in the film Harry Potter and the Deathly Hallows – Part 1.
BEHIND-THE-SCENES MOVIE FACTS: Wand-related facts, trivia, and stories from the set of the Harry Potter films.
STUNNING ART AND IMAGES: Photos from the films and gorgeous illustrations bring the world of wands to life!